Kazoku Martial Arts Centre had been invited to take part at the Ontario Winter Games in Barrie, Ontario for karate. Two of the club’s elite athletes were given a great opportunity to train with Sensei Gabriel and Sensei Anta, provincial coaches under the Ontario Karate Federation, to provide Ethan and J with the tools they will need to improve their overall performance in future elite competitions.

END_OF_DOCUMENT_TOKEN_TO_BE_REPLACED

Under the Ontario Karate Federation

The Elite KMAthletes at Kazoku Martial Arts Centre completed their first full competitive season at the Elite Level with the Ontario Karate Federation.

END_OF_DOCUMENT_TOKEN_TO_BE_REPLACED

Yesterday, four of our KMAthletes rose at 5am and drove all the way to the Vaughn Sportsplex to compete in the Third Team Selection at the Elite Level with the Ontario Karate Federation. For the four of them, they have only had the chance to compete at this level a handful of times, however, their hard work in the dojo is starting to show as they continue to improve in their competitive skill.

END_OF_DOCUMENT_TOKEN_TO_BE_REPLACED 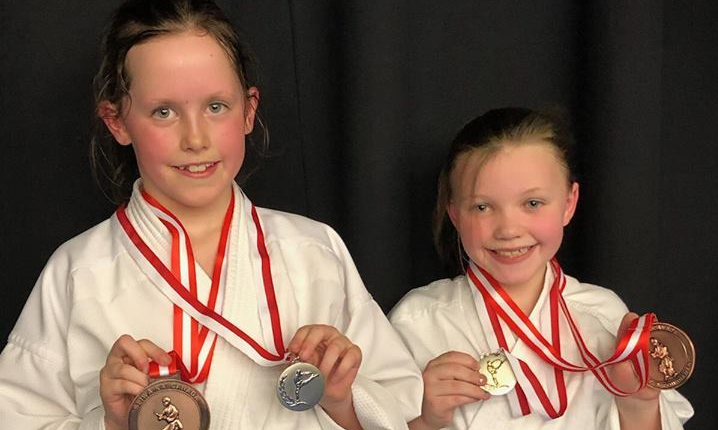 Kazoku Martial Arts won medals in all age and belt levels this weekend while competing in Ingersoll this past weekend. The Seiwa Kai Canada Open welcomed over 130 athletes from all over Ontario.

END_OF_DOCUMENT_TOKEN_TO_BE_REPLACED

It was a super exciting day as we took to the mats, once again, to face new and familiar faces from dojo’s across Ontario; an event sanctioned by the Ontario Karate Federation.

END_OF_DOCUMENT_TOKEN_TO_BE_REPLACED 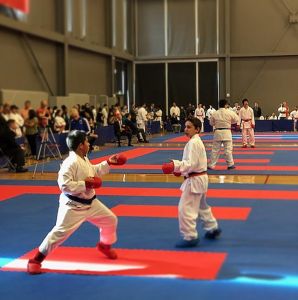 The day starts with the sun barely up and you begin to make your long drive to the venue. When you arrive you walk through the doors to hear nothing but commotion as each competitor makes their way to compete. And even though you are tired and you know it’s going to be a long day, it is always exciting to be there.

October 22, 2017 marked the first time any of our students would compete on the mats themselves in the recreational division with the Ontario Karate Federation. A longer day for some, but exciting all the same!

First we had our 6-9 year olds compete in kata (a series of moves put into a pattern) and kumite (or sparring). And even though they were nervous, they pulled it off and showed the other competitors they meant business. Afterwards, our 10-12 year old students made it to the mats and managed to make it to the second round. They certainly moved like true athletes.

When Liam went up to compete in the 13-14 year kata, we fell silent. He didn’t just win his first round, or his second, but managed to attain a silver medal. A first for him and our club! Excited, we cheered and a proud mum and dad could be heard across the room.

And that was just a start.

Our second winner was Nick who brought home a bronze in kumite. Our girls Amie, Olivia, and Alyssa also managed to bring home a couple more bronze, silver, and even gold medals in kata and kumite! They were forces to be reckoned with. 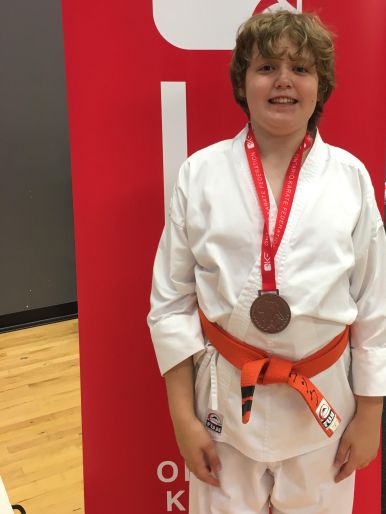 But congratulations again to all of our competitors who came out to test their skills and who gave it their all. Thank-you to all of the parents who invested a whole Sunday to cheer on their little ones as well as Jeric and Jamie-lynn (plus Brad!) for coming out to assist Sensei James while we had multiple rings going on at once. To our fellow friends who provided us with the proper equipment when we needed it. It’s great to know everyone is there to support one another. And lastly, thank-you to the organizers/volunteers who managed to pull-off another wonderful competition. 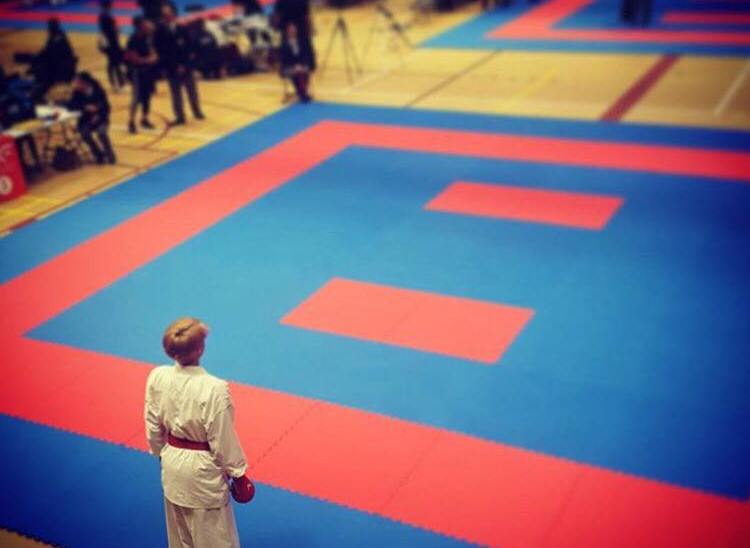 Dean, our club’s elite competitor, bravely entered the ring to compete in the Kumite (sparring) division against other young athletic individuals. His division was the 14-15 year old Cadet Boys -57kg. In his first round, Dean’s tenacity brought him up six points against his competitor. Unfortunately within the final few seconds his opponent captured three points bringing him one point above Dean.

We were given a second chance later within the match to rank-up, but after receiving a kick to the inner-thigh the match had ended with our the other competitor advancing.

However with this being Dean’s first time competing at the elite level, his confidence has made us very proud here at Kazoku Martial Arts Centre. We now know what we are up against and will continue to improve our skill level to compete more in the future.

“I was really glad that there was so much support in the crowds today while I competed. I just wanted to let everyone know that I appreciate all of their help and support. And I appreciate the time they took out of their Sunday to cheer on myself and the Dojo. Also, thank you Sensei, for believing in me.” – Dean .M

And a special thanks from us at Kazoku Martial Arts Centre to Shihan Yabunaka and Victoria Rode for guiding us through the tournament, it’s processes, and getting us mentally prepared for Dean’s competition. We would also like to say thank-you to all of the individuals who helped organize the event. Conestoga College for hosting, the organizers at the Ontario Karate Federation, the referee’s, other competitors, and of course ALL of the volunteers who took the time out of their weekend to help run things extra smoothly.

And thank-you to Peter Pakatchian for ensuring we were in the right ring at the right time. His calm focus certainly made it feel that everything was under control.